Manometer Survey: The manometer survey, also known as a floor survey, is a measurement of the differences in interior floor elevations. The flatness of the interior floor was measured using a highly accurate survey device known as a Manometer. The entire interior floor area was surveyed, and the elevations were recorded. These data points were then entered into a computer program that provides a topographical map showing the high and low elevation contours of the floor surface. This topographical map shows where the foundation is no longer level and shows where support and stabilization are needed. The floor survey also demonstrates whether any floor slab heave or settlement exists.

An edge heave pattern is observed in the southeastern portion of the home’s foundation as indicated by the higher elevation readings (Topographical 3D Map). This phenomenon usually occurs in areas where structures are built on expansive clays. Moisture from one or any combination of the following: storm runoff, poor drainage around the foundation, plumbing leaks, and/or underground moisture sources will allow the moisture/vapor to accumulate underneath the foundation. The moisture then interacts with the clayey soils, causing them to swell. The clay soils take the path of least resistance and expand upwards and lift the foundation.

After examining the home and performing the manometer survey, Arizona Foundation Solutions believes the home could be experiencing minor foundation settlement at the northern and eastern portions of the home as shown by the damage (Signs of Stress) and lower readings (Topographical 2D Map). The drop-off in floor elevations on the topographical map is consistent with a foundation settlement pattern. Settlement can be caused by one or any combination of many factors including sub-grade saturation of moisture due to poor drainage, years of storm runoff, plumbing leaks, improper compaction, the lack of a proper foundation system, and/or (in most cases) natural earth movement.

Arizona Foundation Solutions believes that the proper way to deal with edge heave is to first install piers to support the perimeter walls of the area that is experiencing edge heave. Under excavation will be performed in this area. This is where some of the heaving soils will be removed to create voids for future expansion. If possible, the perimeter can be lowered to practical recovery. This will be determined by field conditions.

AZFS also recommends that piles be installed to support the western columns due to the damages.

A protection plan has been designed to stop the northern portion of the home and the eastern portion of the garage from any possible future settlement and further damages. AZFS can permanently stabilize this area at the Homeowner's discretion.

Arizona Foundation Solutions believes that the proper way to permanently stop the perimeter foundation of the garage is to underpin the areas that are experiencing movement. Underpinning is the process of installing deep foundation elements called piles. Piles are engineered foundation supports that are driven down past the unstable soils and are then locked up into load-bearing strata, which can support the loads that are transferred to them. Once the piles have been installed, they can be used to lift the perimeter foundation up to its Highest Practical Maximum. The piles should be spaced approximately six to eight feet on the center and should start and stop near the hinge points of movement (exact spacing to be determined after load-bearing calculations). In this case, the piles would be located at the eastern portion of the garage. The slab can then be treated by injecting a lightweight expansive polyurethane to fill existing voids and lift the floor slab. This is done by drilling small 3/8” holes in the slab after which polyurethane grout is injected directly under the slab to raise it up to its Highest Practical Maximum. Using the expansive materials will help prevent additional slab settlement by compacting the upper layer of soil as it expands.

AZFS believes the best way to stabilize the crawl space is with a beam and Smart Jacks. These are adjustable galvanized supports engineered to be placed under the sagging floors to help prevent settlement of the floor joist system. The Smart Jack sequence should start at approximately 2’ off each perimeter wall and should not be spaced more than 7’ on center (exact spacing to be determined after load-bearing calculations). An engineered push pier will be driven concentrically beneath the beam at each Smart Jack location to provide a footing for each Smart Jack. If for whatever reason the installation of concentric piers is not possible, a concrete footing of engineered size will be poured beneath the Smart Jack to distribute the load. The Smart Jacks will then be cut to size and set in place. Finally, the units will be adjusted to lift the sagging floors back to their best functioning point or the Highest Practical Maximum.

This crawl space plan addresses foundation support. Carpentry and non-soil-related movement are outside the scope of work of this project.

Arizona Foundation Solutions believes that the proper way to deal with floor settlement in this situation is to compaction grout and is summarized as follows:

Compaction Grouting is done by coring 2-3” diameter holes in the floor. The holes would be spaced approximately 6 to 8 feet in the center. Steel casing is driven to refusal after which low very thick cement grout is pumped under high pressure. Polylevel is very economical but does not stabilize or improve any soils that need densifying. Compaction Grouting is several orders of magnitude more expensive however it does improve and stabilize any loose soils that are in need of improvement. Prior to installing compaction grout, AZFS recommends a soil sample be performed to determine what type of grout mix would be necessary. Because this building is built on a tilted lot and backfill is most likely the cause of the soil movement, Compaction Grouting is the recommended course of action. Polylevel will not include a warranty as it does not affect the backfill soil in the same manner as Compaction Grouting.

Hire a reputable plumbing leak detector and repair service to check both pressure and sewer lines, this is usually done for less than $500. If repairs are needed, they are usually not expensive.

Make sure the grading of the terrain is sloped downwards at a 5% slope from the home at all areas of the perimeter.

Stop irrigating plants that are near the foundation and make sure there is nothing trapping the moisture from flowing away from the home. 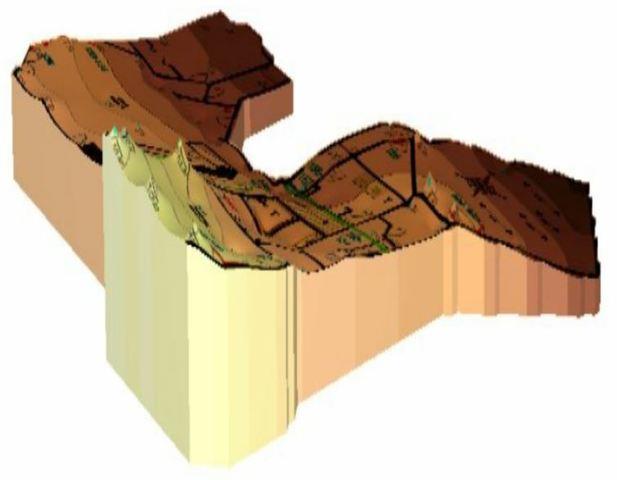 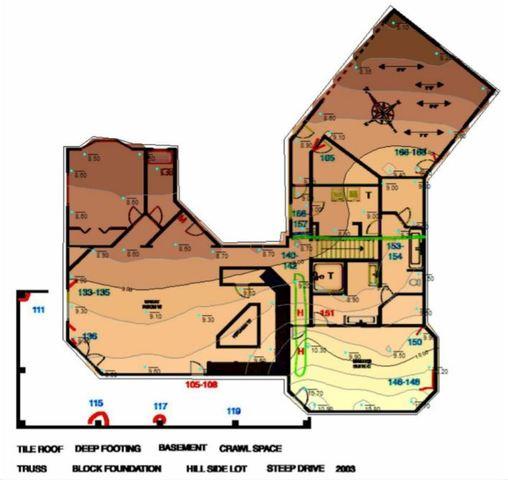