The Homeowners of this 1956’s single-family home got in contact with us after noticing a few signs of foundation problems.

These signs of stress included:

The Foundation Performance Association (FPA) “Guidelines for the Evaluation of Foundation Movement for Residential and Other Low-Rise Buildings” were adopted to correlate acceptable and unacceptable distress phenomena with actual survey elevations. Deflection and Tilt calculations were performed and compared to allowable values. For this engineered analysis, the deflection of the slab (L/147) exceeds the allowable deflection limit of L/360. In addition, the tilt of the slab (0.23%) was less than the allowable tilt of 1.00%.

Arizona Foundation Solutions believes that the proper way to permanently stop the perimeter foundation settlement is to underpin the areas that are experiencing movement. Underpinning is the process of installing deep foundation elements called piles. Piles are engineered foundation supports that are driven down past the unstable soils and are then locked up into load bearing strata, which can support the loads that are transferred to them. Once the piles have been installed, they can be used to lift the perimeter foundation up to its Highest Practical Maximum. The piles should be spaced approximately six to eight feet on center and should start and stop near the hinge points of movement (exact spacing to be determined after load bearing calculations). In this case, the piles would be located at the south, southeast and southwestern portions of the home.

AZFS does not suggest a settlement repair plan, for the southern portion of the Enclosed Porch and northern portion of the Office, at this time as there is no significant damage to correspond with the elevation readings. The home should be monitored and should damage arise in the future, AZFS should be contacted to perform a comparative monometer survey at a discounted price. 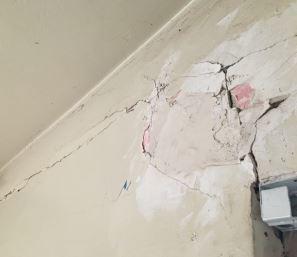 There are some concrete cracks on the wall 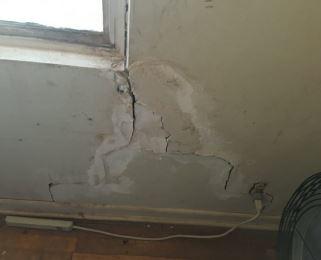 The most notorious cracks were by the window 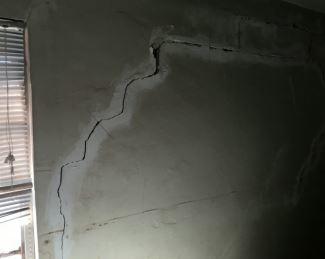