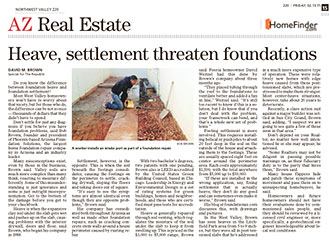 Do you know the difference between foundation heave and foundation settlement?

Most West Valley homeowners won’t have to worry about that nicety, but for those who do, the difference can be not so nice – thousands of dollars that they didn’t have to spend.

Don’t settle for just any diagnosis if you believe you have foundation problems, said Bob Brown, founder and president of Phoenix-based Arizona Foundation Solutions, the largest home foundation repair company in Arizona and an industry leader. 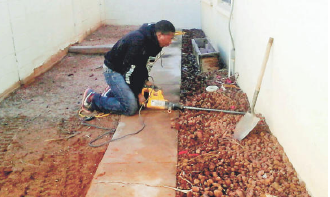 Many misconceptions exist, even by those in the business, Brown said. Valley soils are much more complex than many think, reacting to moisture differently. Some of this misunderstanding is just ignorance and some is just outright misrepresentation. Get to the bottom of the damage before you get to your checkbook.

Heave is when the expansive clay soil under the slab gets wet and pushes up on the slab, causing problems with the interior drywall, doors and floor, said Brown, who began his company in 1988.

Settlement, however, is the opposite. This is when the soil beneath the footings on the perimeter to settle, cracking drywall, sloping the floors and taking doors out of square.

“It’s easy to see the symptoms are almost identical even though they are opposite problems,” Brown said.

His company has remediated both throughout Arizona as well as made other foundation repairs, such as cracking concrete stem walls around a house perimeter cause by rusting re-bar.

With two bachelor’s degrees, two patents with one pending, Brown also is LEED-accredited by the United States Green Building Council, based in Chicago. Leadership in Energy and Environmental Design is a set of rating systems for green buildings, homes and neighborhoods, and those who are certified must pass tests for accreditation.

Heave is generally repaired through soil venting, which regulates the moisture of the soil under the slab to keep it from swelling up. This is priced in the $3,000 to $5,000 range, Brown said. Peoria homeowner David Weitzel had this done by Brown’s company about three months ago.

“They place tubing through the roof to the foundations to ventilate better and added a fan in line,” Weitzel said. “It’s still too recent to know if this is a solution, but I do know that if you don’t deal with the problem, your framework can bend, and that’s a whole new set of problems.”

Footing settlement is more involved. This requires installing helical or push piles to about 20 feet deep in the soil on the outside of the house and attaching them to the footings. These are usually spaced eight feet on the center around the perimeter area. Each costs approximately $1,500, with a total anywhere from $5,000 up to $50,000.

“If these are installed in the wrong application, say, fixing settlement that is actually heave, they don’t do any good and can sometimes even make it worse,” Brown said.

“His blog at foundationaz.com discusses this, with drawings and pictures.

In the West Valley, Brown has seen heaves in the Litchfield Park area from 5 to 9 inches, but they were all in post-tensioned slabs that he’s addressed in a much more expensive type of operation. These were relatively new homes with edge heave caused from these post-tensioned slabs, which are pre-stressed to make them stronger. Most center-heave situations, however, take about 20 years to deteriorate.

Recently, a class action suit against a major builder was settled in Sun City Grand, Brown said, adding, “I suspect we are going to see quite a few of these soon in that area.”

Don’t depend on your Realtor, no matter how well intentioned he or she may appear, he advised.

“Some Realtors may not be diligent in passing possible warnings on, as their fiduciary duty is to the party that hires them,” Brown said.

Many house flippers hide and patch these symptoms of movement and pass them on to unsuspecting homebuyers, he said.

Homeowners and future homeowners should not have their evaluations done by commissioned sales people, and they should be reviewed by a licensed civil engineer or, more specifically, a geotechnical engineer knowledgeable about local soil conditions.