The owners of this beautiful Show Low, AZ home reached out to us after noticing a few signs of a foundation issue. Left unaddressed, foundation problems will only get worse over time.

These signs of a foundation problem this home had included:

-          Locate the areas of foundation and floor slab failure if any

-          Visually inspect and record the interior and the exterior of the location.

Interior Inspection: The interior of the location was visually inspected. Items such as floor cracks, wall cracks, ceiling cracks. sloping floors, uneven counter tops, doors and windows that are out of alignment, cracked window glass and bowed walls were noted and recorded.

Manometer Survey: The manometer survey. also known as a floor survey, is a measurement of the differences of interior floor elevations. The flatness of the interior floor was measured using a highly accurate survey device known as a Manometer. The entire interior floor area was surveyed and the elevations were recorded. These data points were then entered into a computer program that provides a topographical map showing the high and low elevation contours of the floor surface. This topographical map shows where the foundation is out of level and shows where support and stabilization are needed. The floor survey also demonstrates whether any floor slab heave or settlement exists.

After examining the home and performing the manometer survey, we believe the home could be experiencing foundation settlement at the western portion of the home and the southern, eastern and northern portions of the Garage as shown by the damage (Signs of Stress) and lower readings on the Topographical Map. The drop off in floor elevations on the topographical map is consistent with a foundation settlement pattern. Settlement can be caused by one or any combination of many factors including sub-grade saturation of moisture due to poor drainage, years of storm runoff, plumbing leaks, improper compaction, the lack of a proper foundation system, and/or (in most cases) natural earth movement.

The Foundation Performance Association (FPA) "Guidelines for the Evaluation of Foundation Movement for Residential And Other Low-Rise Buildings" were adopted to correlate acceptable and unacceptable distress phenomena with actual survey elevations. Deflection and Tilt calculations were performed and compared to allowable values. For this engineered analysis, the defection of the slab (L/247) was more than the allowable deflection limit of L/360. In addition, the tilt of the slab (0.39%) was less than the allowable tilt of 1 .00%.

We believe the proper way to permanently stop the perimeter foundation settlement is to underpin the areas that are experiencing movement. Foundation underpinning is the process of installing deep foundation elements called piles. Piles are engineered foundation supports that are driven down past the unstable soils and are then locked up into load bearing strata, which can support the loads that are transferred to them. Once the piles have been installed, they can be used to lift the perimeter foundation up to its Highest Practical Maximum. The piles should be spaced approximately six to eight feet on center and should start and stop near the hinge points of movement (exact spacing to be determined after load bearing calculations). In this case, the piles would be located at the southern, eastern and northern portions of the Garage.

The slab in the Garage can then be treated by injecting a lightweight expansive polyurethane (PolyLevel) to fill existing voids and lift the floor slab. This is done by drilling small 3/8“ holes in the slab after which polyurethane grout is injected directly under the slab to raise it up to its Highest Practical Maximum. Using the expansive materials will help prevent additional slab settlement by compacting the upper layer of soil as it expands.

It is also beneficial to manage the moisture around the home using conventional means as outlined below:

• Hire a reputable plumbing leak detector and repair service to check both pressure and sewer lines.

• Make sure the grading of the terrain is sloped downwards at 5% slope from the home at all areas of the perimeter.

When permanently stabilizing, lifting and/or mitigating a foundation movement problem, we recommend waiting AT LEAST 6 months before investing in cosmetic repairs. 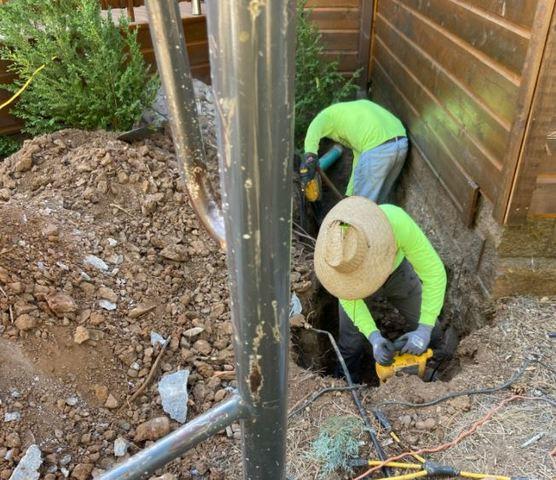 Randall and his Team of Superstars were able to level the foundation on this Show Low, AZ home. 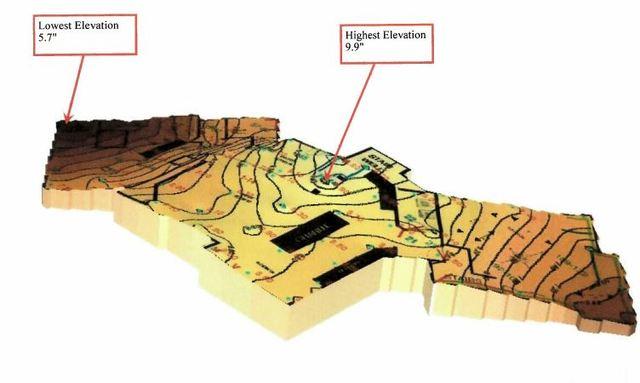 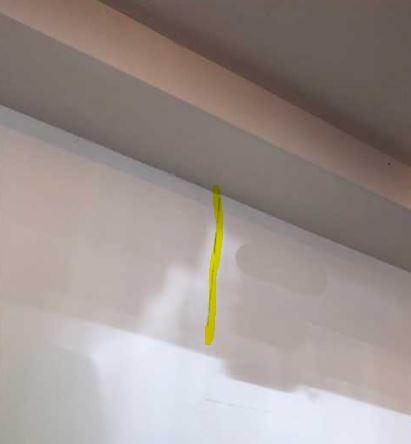 Interior drywall cracks like this one are a common sign of a foundation problem. These signs of stress will only get worse until the root cause of the problem is addressed.