The Homeowners of this 2002’s family house got in contact with us after seeing a few symptoms of foundation problems.

After examining the home and performing the manometer survey, Arizona Foundation Solutions believes the home could be experiencing foundation settlement at the northwestern portion of the home as shown by the damage and lower readings on the topographical map. The drop off in floor elevations on the topographical map is consistent with a foundation settlement pattern. Settlement can be caused by one or any combination of many factors including sub-grade saturation of moisture due to poor drainage, years of storm runoff, plumbing leaks, improper compaction, the lack of a proper foundation system, and/or (in most cases) natural earth movement.

A possible heave pattern is observed in the northeastern and central portions of the home as indicated by the higher elevation readings on the 3D topographical map. This phenomenon usually occurs in areas where structures are built on expansive clays. Moisture from one or any combination of the following: storm runoff, poor drainage around the foundation, plumbing leaks and/or underground moisture sources will allow the moisture/vapor to accumulate underneath the foundation. The moisture then interacts with the clayey soils, causing them to swell. The clay soils take the path of least resistance and expand upwards and lift the foundation.

There appear to be cracks in the floor slab. When the slab cracks all the way through, the separate sections can move independently of one another. This allows for severe damage to flooring and other signs of interior stress like pinched doors, drywall, and/or ceiling cracks.

The Foundation Performance Association (FPA) “Guidelines for the Evaluation of Foundation Movement for Residential and Other Low-Rise Buildings” were adopted to correlate acceptable and unacceptable distress phenomena with actual survey elevations. Deflection and Tilt calculations were performed and compared to allowable values. For this engineered analysis, the deflection of the slab (L/317) exceeds the allowable deflection limit of L/360. In addition, the tilt of the slab (0.1%) was less than the allowable tilt of 1.00%.

AZFS does not suggest a settlement and/or heave repair plan at this time as there is no elevation pattern to correspond with the low and/or high elevation readings. AZFS should be contacted in 12 months to perform a comparative monometer survey at a discounted price to then determine if repairs are recommended at that time.

The underpinning plan is being offered as a preventative plan only.

Arizona Foundation Solutions believes that the proper way to permanently stop the perimeter foundation settlement is to underpin the areas that are experiencing movement. Underpinning is the process of installing deep foundation elements called piles. Piles are engineered foundation supports that are driven down past the unstable soils and are then locked up into load bearing strata, which can support the loads that are transferred to them. Once the piles have been installed, they can be used to lift the perimeter foundation up to its Highest Practical Maximum. The piles should be spaced approximately six to eight feet on center and should start and stop near the hinge points of movement (exact spacing to be determined after load bearing calculations). In this case, the piles would be located northwestern corner of the home.

The Moisture Level® System is being offered as a preventative plan only.

Arizona Foundation Solutions believes that the proper way to deal with foundation heave is by lowering and managing the moisture content of expansive clays that cause heaving. It is our recommendation to manage the moisture underneath the foundation through active soil depressurization. This process will remove existing moisture from the soil as well as new moisture from the expansive clays and will help bring the moisture content down to an optimal level using both convection and evaporation. This will mitigate future heaving of the clay soil and possibly allow existing heaving to subside. This process can take six months to several years to reach equilibrium. Minor movement may still occur, as the Moisture Level® System is intended to prevent significant and continual upward movement caused by moisture. The Moisture Level® System is designed to control the moisture of expansive clays that cause heaving under the home. If optimal results are not achieved with the Moisture Level® System including additional measures described below, more aggressive measures may be required. The manometer and foundation survey will act as a baseline to measure performance over time.

AZFS recommends that the homeowner hire a Geotechnical Engineer to take soil samples in a way that accurately represents the soils on the property. This can help in determining any possible settling or heaving soils.

Composite interlocking can be performed to tie the broken pieces of the concrete together. The existing cracks will be cleaned, and non-parallel lines will be cut across the existing cracks. Next carbon fiber laminate stitches will be inserted into the non-parallel cuts and then the gaps will be filled with a 2-part poly. Finally, the crack should be ground smooth to minimize the differential. If done properly, this will allow the slab to function as one floating unit to help prevent the damages to flooring, ceiling and walls. If this is instead expansion joint separation, the joint should be cleaned, routed, and re-caulked with an expansive joint filler. A determination as to which repair is needed will be made on site once the crack is exposed. 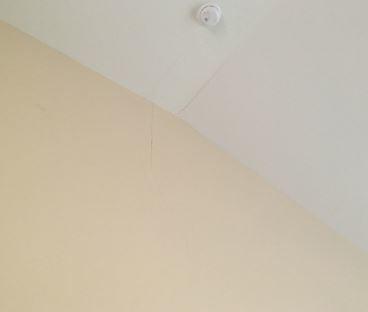 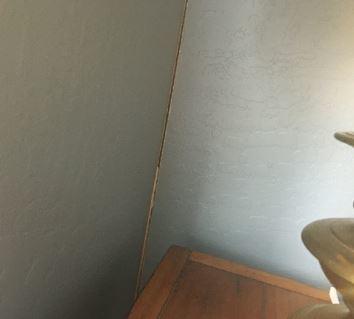 Wall-cracks got located in many rooms houses including the outside 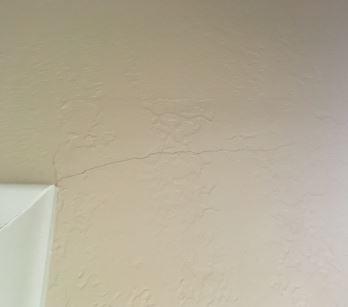 There were more cracks on the wall right by the door. 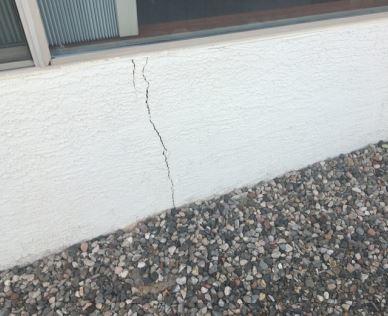